What became of the DC truckers’ convoy? 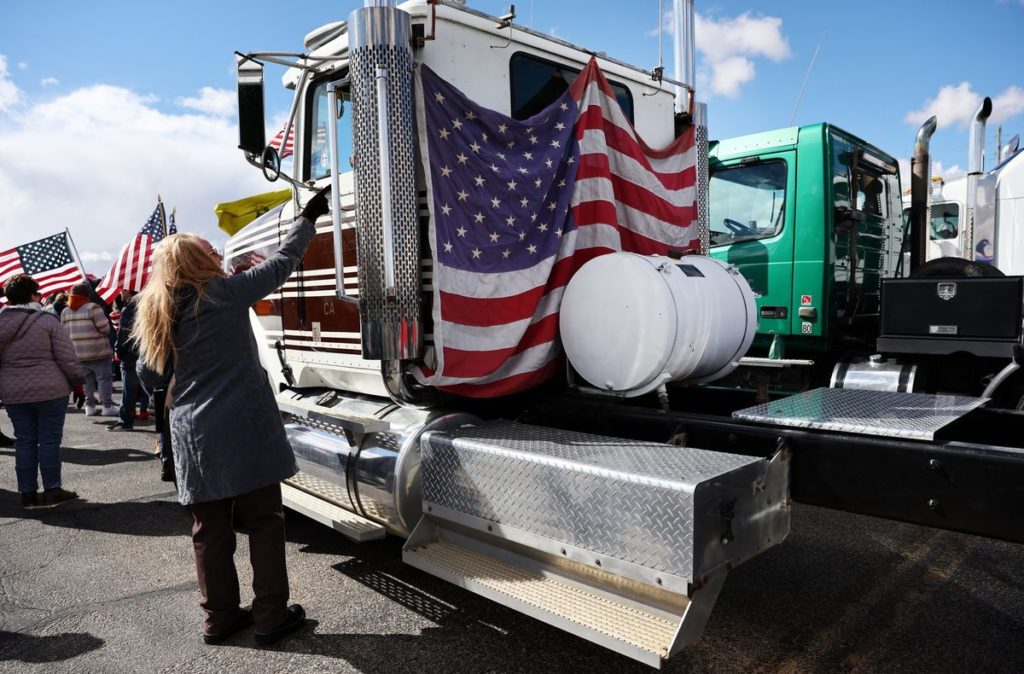 When protesters rioted in Washington, D.C. after the death of George Floyd, leftist politicians welcomed them.  They even went so far as to paint “Black Lives Matter” in large letters along 16th Street.

During her press conference, Mayor Muriel Bowser said, “There are people who are craving to be heard and be seen and to have their humanity recognized.  We had the opportunity to send that message loud and clear on a very important street in our city.”  She said the message was “Black Lives Matter,” but this first part of the quote could have just as easily applied to the truck drivers making up the People’s Convoy.

Those truckers didn’t get a street painted over in their honor.  They aren’t even allowed into the capital city of their country.  They were “banished” to the Beltway, allowed only to circle D.C.

John Falcicchio, chief of staff for Bowser, said, “Mayor Bowser wanted to make it abundantly clear that this is DC’s street and to honor demonstrators who (were) peacefully protesting on Monday evening.”  This too could apply to the truck driver, and even more so, since many of the D.C. protesters weren’t peacefully demonstrating.

When the convoy arrived in Maryland on March 3, they began working with law enforcement agencies to ensure that their travels around the Washington, D.C. beltway would be peaceful and safe.  The groups met daily and mapped out the route for the day.

That changed in the middle of the month.  The People’s Convoy website issued a press release that read, in part, “Despite the convoy’s active, transparent and daily communication with special agents from both the Metropolitan DC Police Department and the Maryland State Police Department, the DC Metro Police have blocked all entrances into the US Capital for the past two days.”

Snowplows and barricades were utilized to block the off-ramps.  Unfortunately, this not only illegally stopped the trucks from entering the city, but stopped all vehicles, causing even more back-ups, delays, and frustration.  At times, traffic came to a standstill, and drivers exited their vehicles.

“The District of Columbia was monitoring and prepared for demonstration activity this afternoon,” Homeland Security and Emergency Management Agency director Christopher Rodriguez said in a statement.  It read, “The Metropolitan Police Department implemented targeted traffic control measures as part of our layered mitigation strategy … to minimize disruptions to our residents and businesses by keeping large commercial vehicles off our surface streets .” This included delivery vehicles for businesses in the city, so how did that minimize disruptions?  Instead, it maximized the disruptions to commuters traveling the Beltway.

The press release concluded, “It is a deliberate abuse of power, as law enforcement strips First Amendment Rights away from hardworking taxpayers who merely want to make a statement, peacefully traveling on taxpayer-funded streets.”

Our founding fathers would have applauded the truckers.  But many of the professional politicians in our nation’s capital think they know better what’s best for U.S. citizens than those who engrafted rights into our then-fledgling Republic.  The very first amendment of the Bill of Rights clarifies that We the People have the right to petition an abusive government.

The officials in Washington didn’t learn anything from watching what happened in Ottawa, Canada earlier this year during the Freedom Convoy.  Canadian officials took drastic actions against peaceful citizens to drive them out of the city.  While those actions eventually “worked,” they lost the trust of the citizens they claim to protect.  In essence, they won the battle, but they will lose the war.

It seems Washington is on the path to doing the same thing.  So far, the only people who have violated the law during the People’s Convoy are the politicians, city workers, and police who illegally blocked a public street to keep law-abiding citizens out of the city.

“Every American has a constitutional right to peacefully protest and visit our nation’s capital,” said Brian Brase, co-organizer of The People’s Convoy.  “We have circled the Beltway for the past two weeks in a law-abiding demonstration of solidarity with the American people without incident.  Threatening arrest and blocking access to D.C. is not going to stop us from making our voices heard.”

The government needs to start obeying the law and allow the truckers to pass through the city.  They have the right to protest peaceably.  If they aren’t allowed to do that, they will make sure to voice their frustration at the ballot box, and while D.C. officials may think they are safe from reprisal, federal officials are not.  If the unconstitutional leftists are voted out in November, our capital may be put under stricter federal oversight.

Michael A. Letts is the CEO and Founder of In-VestUSA, a national grassroots non-profit organization helping hundreds of communities provide thousands of bulletproof vests for their police forces through educational, public relations, sponsorship, and fundraising programs.